The first few years of life present a unique opportunity to lay a firm foundation of healthy brain architecture. Early brain development determines so much of what comes later in life.

According to the Center on the Developing Child at Harvard University, babies’ brains are developing more than 1 million new neural connections every second! Young brains are built through serve-and-return interactions, the Center explains: “When an infant or young child babbles, gestures, or cries, and an adult responds appropriately with eye contact, words, or a hug, neural connections are built and strengthened in the child’s brain that support the development of communication and social skills.”

Here at LENA, we’ve developed technology-based programs that help adults to measure and increase these brain-building, back-and-forth alternations. We call them conversational turns, and they comprise everything from an infant’s coos to a toddler’s words (either real or made up). Based on what we’ve seen work well for the parents and teachers using our programs, we’ve put together a list of six simple ways to boost your baby’s early brain development through the power of early talk.

1. Find 25-minute blocks of time to concentrate on having conversational turns.

Talking to infants and toddlers can be hard. And draining. And at those hard and draining times, it can seem pointless. It’s the farthest thing in the world from pointless, though, and it doesn’t have to be hard or draining.

Our latest data analysis tells us that even the “highest-talking” parents aren’t talking all the time. In a 12-hour day, for instance, they’re only talking a lot with their little one for about eight of those hours. And even within those eight high-talk hours, they’re not talking for the whole hour. Rather, they’re finding about five five-minute chunks of time for their more intensive back-and-forth exchanges.

It’s one thing to say that more talk is better than less talk. It’s another thing entirely to say that five five-minute chunks of time eight times a day is what parents should aim for. The former is too murky a goal to follow through on in any lasting or meaningful way. The latter is more concrete. Even if it seems formidable now, it’s something you can work toward. And as you’re working toward that goal, you’re still doing great things for your child’s early brain development. After all, it’s not as though some magical switch gets flipped once you hit the 25-minute mark — kind of like how it’s still good to jog a mile even on days when you don’t plan on running a marathon.

2. Turn daily routines and activities into opportunities for talk.

Talking with your child doesn’t have to bring the rest of your life to a screeching halt. If it ever seems difficult to start a conversation with an 18-month-old, just remember that whatever you’re doing in the moment could make for fascinating subject matter.

To an infant, hearing about the color of the sponge you’re using to scrub a pot might just make their day. And while you’re at it, you could recollect what got cooked in the pot. Was it a new recipe? Did it taste good? You could even talk about trying to remember what you talked about while you were eating whatever it is that got cooked in the pot! What sounds inane to you (or what you think might sound insane to a bystander) could actually be just the right amount of complex for your child.

Consider this: The Early Math Collaborative identifies four “Precursor Concepts” to introduce to children between the ages of 0 and 3: attributes, comparison, pattern, and change. We’re not talking about anything earth-shattering — just the most basic ways of navigating the world. You can use these categories to guide your conversations. During your daily routine, for example, you could note regular patterns (“It’s time for your diaper change!”) or alterations (“Today we’re going to a new park.”).

If it sounds exhausting to narrate the minutiae of your everyday life, just refer back to #1. You don’t have to do it all the time to make a difference in your baby’s brain development.

How much screen time is too much screen time for children of different ages? That’s much too thorny a question to try to answer in this post. In fact, the American Psychological Association reminds us that research about the effects of screen time is particularly challenging. It often gets watered down into misguided recommendations by the time it reaches the public at large. One thing has become clearer in recent years, though: reducing screen time specifically for infants and toddlers is a no-brainer. They’re not equipped to associate what they see on the screen with what they encounter in real life, and they’re just not learning very much when they’re passively consuming images on a screen.

All that said, we know that screens are all but unavoidable. For better or for worse, they are so deeply embedded in our lives. (The odds are really, really good that you’re reading this blog post on a screen right now, for instance!) At those times when your infant or toddler finds themselves in front of a screen, the key is to make it interactive. And we don’t mean you should strap a virtual reality headset on them. Rather, we mean that you can use screen time as an opportunity to talk about what’s happening in the story they’re watching, or to explain why you jumped out of your chair when your team hit a shot at the buzzer. The video images do next to nothing for their early brain development. The exchanges you have with them do lots.

4. Double down: Your child’s brain development will thank you.

No, this post has not just turned into a blackjack tutorial. When we say “double down,” we mean this: each time you achieve one back-and-forth exchange with your child, try to make it two. Always aim to keep the conversation going.

Tip #1 reminds us to find 25-minute blocks of time to concentrate on having conversational turns. Our data lets us zoom in on those 25-minute high-activity chunks of time. When we do that, we can see that some minutes are quiet while others are full of conversational turns. Increasing back-and-forth exchanges with your child doesn’t mean hitting a quota every minute of every day. Rather, it means taking advantage of the opportunities as they present themselves. If splashing the water in the tub makes your baby coo, then you could double down and do it again. You could talk to them about how delightful it is to see them react like that.

Digging deeper into a conversation with a baby can sometimes seem like the easiest thing in the world. After all, they’re discovering things for the first time, so seeking to impress them is really setting the bar pretty low. That said, we know it can also seem like the hardest thing in the world sometimes, especially when you aren’t quite certain whether they’re reacting to you or not. Doubling down means taking advantage of those times when you know they’re listening and reacting.

The conversation doesn’t always have to start with you. Sometimes it’s the child who fires things up. Notice what your child is interested in — what they look at, what they do, what they say — and engage with them on that topic. This is certainly easier to do when you happen to have time for a leisurely, toddler-paced stroll around the neighborhood with your child. But it’s not something you should altogether neglect at busier times of the day, when your attention might be divided.

It’s easier to tune in and respond when you get down on their level. When you’re face-to-face with your infant or toddler, you can share eye contact, facial expressions, hugs and kisses, and conversation. This is an excellent strategy to foster joint attention between you and your child. Responding to what the child is doing or interested in is powerful, because your response tells the child that their actions influence your behavior. This is exciting for the child, and it begins to show them the power of conversation.

6. Avoid interrupting or not responding.

Imagine this scenario: You’re at a petting zoo and your 2-year-old happily exclaims, “I pet the goat!” Don’t interrupt (“Come on, it’s time to start walking back to the car.”) and don’t appear uninterested (“Okay, that’s nice.”). This is an opportunity to repeat what they’ve said and add on to it.

This is a technique called “recasting” — when the adult repeats some or all of the child’s words and adds new information while maintaining the basic meaning the child expressed. In this scenario, you could respond to “I pet the goat!” with something like “You pet that white goat, and I think she liked it!” This strategy is most helpful and most powerful for children once they begin forming more complex, multi-word sentences.

Get a printable copy of these tips! 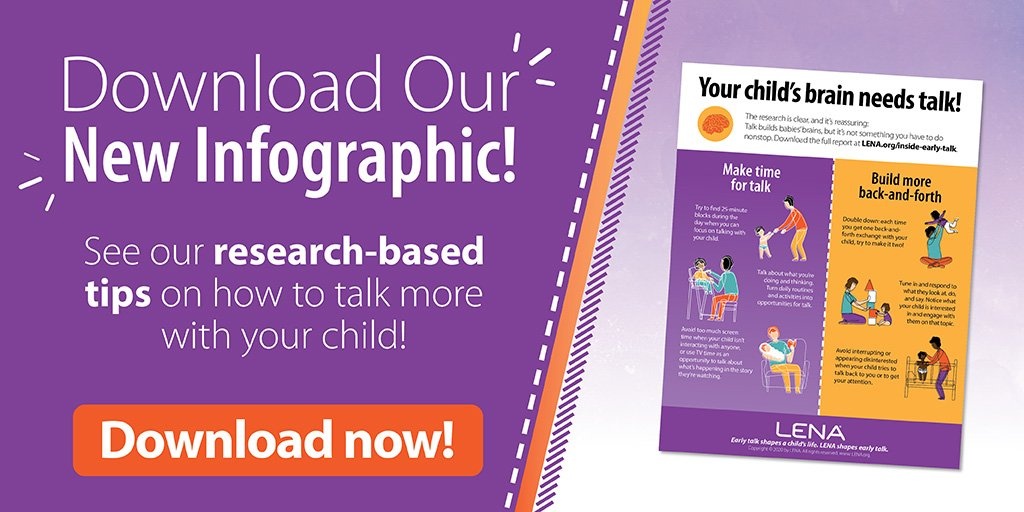